Blazor is an awesome UI framework which brings the power and ease of .NET to your browser. At certain points Blazor does automatically render your UI, but there are also some "pitfalls" you have to be aware about. As a small disclaimer I assume that your components derive from ComponentBase which is the default when you create "normal" Blazor components. From a technical point of view IComponent would satisfy the Blazor renderer, but if you use this, I think you already know what will come next.

Let's begin with the obvious candiate.

StateHasChanged is a protected method, which basically tells the Blazor renderer: "Hey please redraw my compoennt". This can be for example very handy in conjunction with timers or incomplete asynchronous tasks. The latter one will be addressed later in that article.

This method is called after the Blazor renderer has done all the other lifecycle events. As the name suggests this lifeycle method is called after the last render. That means if you update some parameter, which should be reflected in the UI, though luck with this one. Blazor will not render anything here. If you want to render something in OnAfterRender you can utilize our friend StateHasChanged.

A lot of the lifecycle events are async (OnInitializedAsync), as well as event handlers (MyEvent.InvokeAsync(someProp)). Asynchronous stuff is a bit special. Everytime on the first await boundary the Blazor pipeline will trigger a re-render and after the Task is complete. On the Microsoft page, which I will link in the resources below, you can see this for OnInitizaliedAsync and OnParamtersSetAsync: 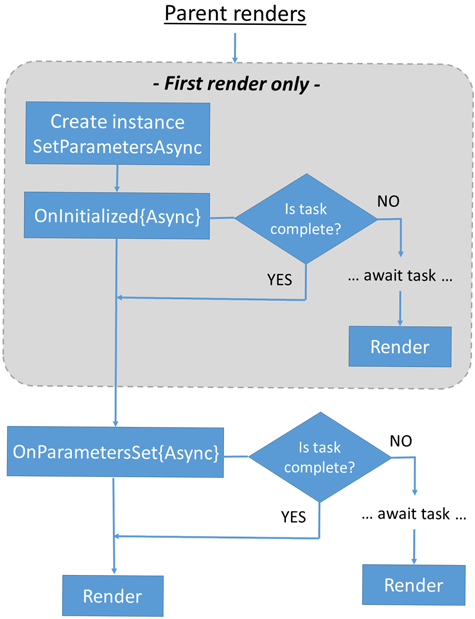 As well as for event handlers: 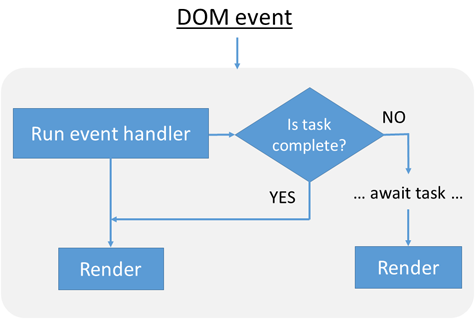 Now what does that mean in code? Just imagine the OnInitializedAsync method:

All the time I explicitly stated after the first await bounday and after the task is done. So if you have the following code, this will still only 2 render cycles:

The question is now: Why does it change only after the first time and after we are completely done? The first time is pretty easy to answer. Before we hit any await boundary the UI-Thread is occupied by our OnInitializedAsync. Only when we hit the await we (the OnInitializedAsync method) give back control to the caller. So that makes sense to a certain degree, but why not after the second or third await?. And the reason is that Blazor has no means to detect how "far" your method has run until now. Any Task has a TaskStatus property which tells the current state of the task. And this state will not change after the first await boundary (except of course you have an exception). It only changes when your task ran into completion. So summarized: Everytime your TaskStatus changes... which does not happen on every await encounter.

So how to fix that? And the answer is again: StateHasChanged. In terms off the example given above:

I created an example on BlazorFiddle where you can see this live in action.

Last but not least there is also a property called ShouldRender and it does exactly what it says. If you set it to false no re-render will be triggered. That might be very helpful if you have a batch of events and you don't want to re-render every single item.

A small example: Just imagine you get a list of items one by one. You know exactly how many items you expect, so there is no need to render everytime you get one item. You will only render if you received all the items.

If you have a typical parent child combination like this:

If you use two-way binding, this looks of course different.

Of course they same as for "normal" aka one-way binding applies: The parent and the child get re-rendered. The special case is that even if the child changes the value, the parent re-renders as well. Internally there are event handlers working, basically applying the logic we discussed earlier. More about the bind-directive can be found on the Microsoft site.

Another special form is the CascadingParameter. Everytime the cascading value changes all child components using that parameter will also be re-rendered. That is why it makes it also quite expensive. First all the events have to be activated and then all the children have to re-render. If you only need the initial value of a cascading value and never interested in updates of such you can provide the IsFixed value. That will cause no re-renders and lighter components as the event chaining can be omitted:

Blazor has a lot of predefined lifecycle events where render cycles are automatically invoked. But also there are some scenario which are not automatically covered.

Sponsors
An error has occurred. This application may no longer respond until reloaded. Reload x